It has been a long time in between posts!  I have not lost my love for fiber art, I have just found a few other loves which seem to fill a lot of time.  Spending our winters in Indio, CA, affords me the opportunity to spend a lot of time playing under the blue skies and warm sunshine.

I begin working with a newly reformed group of my art quilting friends, Kathy Adams, Joanne Bathe, and myself. We formed our group in the Fall of 2013 and completed our first piece in the fall of 2014 We call our group Threads Times Three.  We decided to do fiber pieces of the national parks.  Our first piece we chose was Threads of Yosemite, which was derived from a photo taken by Kathy.  We split the photo into three slices, discussed colors, techniques, etc.,then headed out on our own to begin creating our portion of the whole. We met once in the winter of 2014 at the. Road To California show to view our progress, share bits and pieces of fiber, and to give each other feedback and problem solve.  Then it was back to our separate corners to continue working.  In May of that year, and also June, we managed to get together again.  Finally, in September of 2014, we had our last gathering to complete the pieces, bind them, and prepare them for hanging together.

We entered the piece in Yosemite Renaissance, an art show sponsored by Yosemite National Park, held at the end of February 2015.  The piece was well received, winning a cash prize and receiving the status of The. Viewers Choice Award along with another piece entered in the show.  It will hang at Yosemite NP until May of 2015 and then either join a traveling exhibition or be entered at another venue.

As you can see from the picture above, there are a number of techniques and fibers used to arrive at the finished product.

Read more »
Posted by Unknown at 3:41 PM No comments: Links to this post

Since playing with painting the first seagull, I have been been working on tweaking it.  It has been a learning process which I have enjoyed most and hope to employ what i have learned in the future.  The actual painting of the bird was pretty straight forward.  However, painting the water was not so easy.  Do you know how many You Tube videos are available on painting the ocean?  A ton, and a lot of them are very informative and well done.  After watching a number of the videos, I sat down and attempted to paint the water, and attempted again, over and over again.  I finally came up with a something that I will let be for the time being.

Since I had such a good time painting the birds, I decided to try another piece.  This piece embodies the birds from two pictures which I merged together to make a group shot.   Again, the birds were fun to do, I struggled somewhat with the rocks, and the water was done over numerous times.  I will be adding more texture to the rocks, although they really were worn very smooth by the ocean waves.  I am looking forward to doing some thread painting, quilting, and moving on to some more birds. 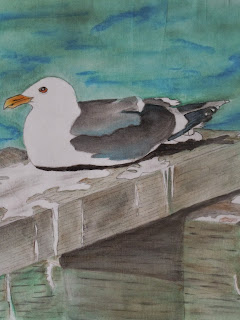 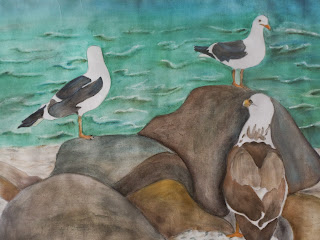 Posted by Unknown at 3:22 PM No comments: Links to this post

I have played a little bit with painting some pieces for future quilts.  Last spring and the spring before, on our way north for the summer, we stayed at Avilla Beach, just above Pismo Beach.  On our walks, I would frequently snap pictures of the seagulls.  I have wanted to use my photos to do a quilt, but had not gotten any farther than composing them in my mind.  Since my creative muse has reappeared in the last week, I have been looking at some of my photos.  I decided it was time to try to combine some of thos seagull pictures to make a fiber art piece.  I spent a day last week playing with the pictures and decided to attempt to draw a pattern using some of them.

I thought that for once I would start small and just attempt one bird to see how I might do it.  So today, after spending 30 minutes searching for my patterns, I began with a single seagull.  I traced it onto fabric which had been treated with Scotch Guard.  I then searched for another 15 minutes for my Inktense Pencils, but to no avail!  I then had to use my Inktense blocks, a brush, and some floating medium to begin the painting process.  For a first attempt, I am happy with what I have come up with!  I still need to add the water behind the bird, do that pesky eye, do some threadpainting, then layer it, quilt it, and finish the edges. 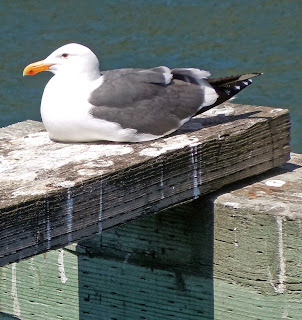 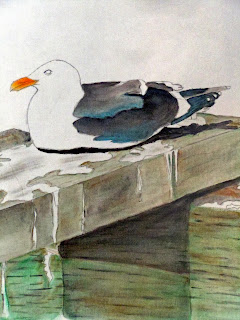 Posted by Unknown at 5:37 PM No comments: Links to this post

I have been on hiatus this summer visiting with my children and grandchildren.  Not much time for playing with my creative endeavors, but plenty of time for making wonderful memories.  We left Washington right after Labor Day, landed in Bend and Oregon for a couple of weeks, and are now taking a leisurely trip south for our winter home.

Gerry, my husband, was wondering if it was time to get rid of the sewing machine and art supplies, but alas, they will remain with us at least for the time being.  I was busy this week working on a challenge for the Fast Friday Fabric Challenge.  It is my first completion in a number of months, but it is done.

I took a piece of fabric which I had created using the Gelli Plate, which is fast becoming one of my favorite texture tools.  I achieved the desired effect by doing numerous layers using stamps, stencils, brushes, etc. on black cotton with metallic paints.  Love the ethereal look on this piece.  I also like the ghosting imprint of the trees on the right, along with the bird image in the tree.  Sometimes serendipity takes over and things turn out better than you expect!  I decided to step outside my comfort zone and mount it on black stretched canvas, adding metallic leaves, jewelry findings, and some decorative trim. 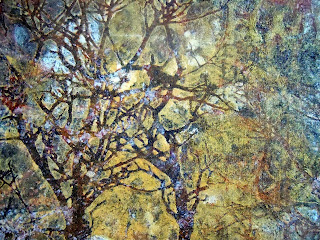 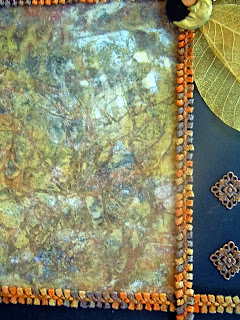 Here is the finished product and I am very happy with the way it turned out.  I think that I will continue to play and do more pieces in this manner.
Posted by Unknown at 5:06 PM No comments: Links to this post

Email ThisBlogThis!Share to TwitterShare to FacebookShare to Pinterest
Labels: FFFC

I finally received all of the pieces to my project a week ago.  I had been working on the roosters which will go on the bottom of the piece and had also created the dirt for the area below the wagon.   I had also been busy reconstructing the piece on the far left.  Here is the picture of all of the wagon pieces hanging together. 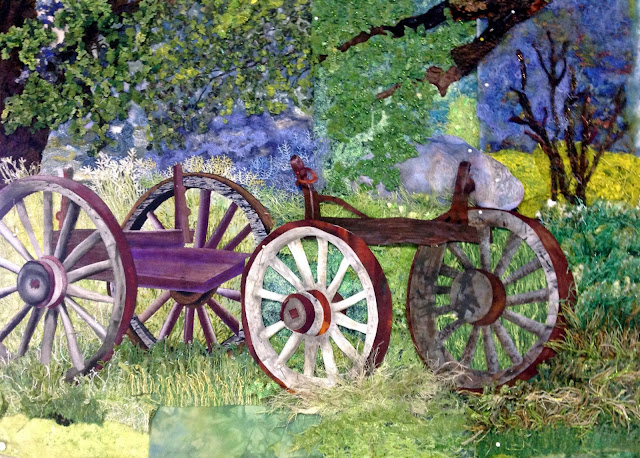 The pieces from left to right were done by Kathy Adams, Joanne Baethe, Dona Ford, and Susan Massini/Louise Page.  Overall, I am quite satisfied with the results, although I now have a lot of fine tuning to do such as darkening the very light wheel in front, resizing the front wheel on the far right piece, adding more detail to the wagon, playing with some of the colors, etc.  After all of that is done, I can proceed to the quilting.

Here is a picture of the dirt piece which will attach to the bottom of the wagon.  It will be irregularly cut and the roosters will be located close to the wagon and then come down into the dirt, smallest to largest for perspective.  I am thinking that there is a lot of work to do yet, but I know that it will be well worth the effort. 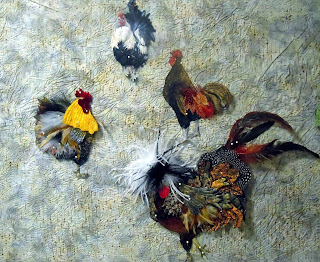 The top rooster was done by Kathy Adams, the next one down on the right by Joanne Baethe, and the other two I made.  I have one more which will go on the piece done by Dona Ford.  I will add some rocks, grasses, etc. and do some simple quilting on this, as i want to maintain as much of the texture as I can.

Posted by Unknown at 2:41 PM No comments: Links to this post

I have been working hard on one section of the rooster quilt and making good progress, albeit, not without some do overs!  I decided to take a break from it yesterday and go play with my friend Carolyn.  She had already made a pattern and gathered fabric to do a portrait of her daughter and son-in-law at their traditional Indian ceremony.

I told Carolyn that I would spend a day playing with her on this project.  I must admit, I have only done a couple of portrait quilts, but I have done a lot of research and looking at what other fiber artists have done.  When I got to Carolyns' she had a table full of fabric, fibers and what ever else she had gathered ready to go.  We played, laughed, and learned together!  It took us about five hours, but when I left, Carolyn had the beginnings of her quilt.  Below is the original photograph and the face/head of Kristen, Carolyns' daughter.  This makes me want to do some portraits of my grandchildren again!  Thanks for letting me play Carolyn! 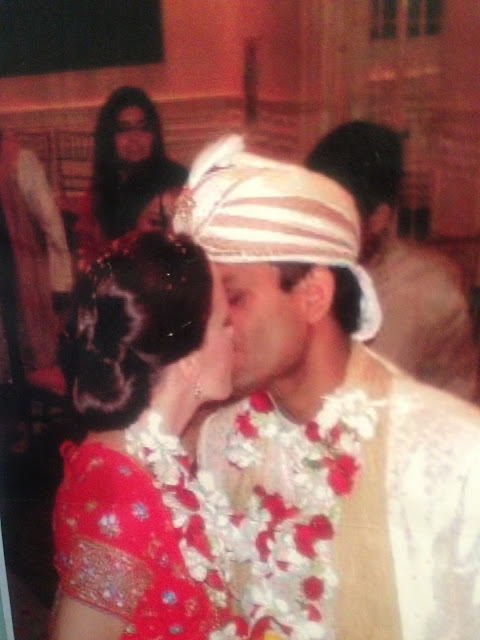 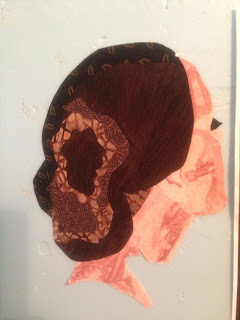 Posted by Unknown at 7:08 AM No comments: Links to this post

I have been working hard today creating my last chicken.  He told me that his name was to be Deke.  Deke was created from another photo of a rooster which I took in the Spring of 2012.  I began with a base of 809 Pellon, added fabric, and then began creating the individual feather sections.  I need to complete the tail section, feet and head and he will be good to go!  I have used felting, silk hankies, fishing Dub, real feathers, netting, snippets, mono- printed fabric and velvet to create him to this point. Another positive experience.
﻿﻿﻿﻿